Not Just for Starlight Anymore 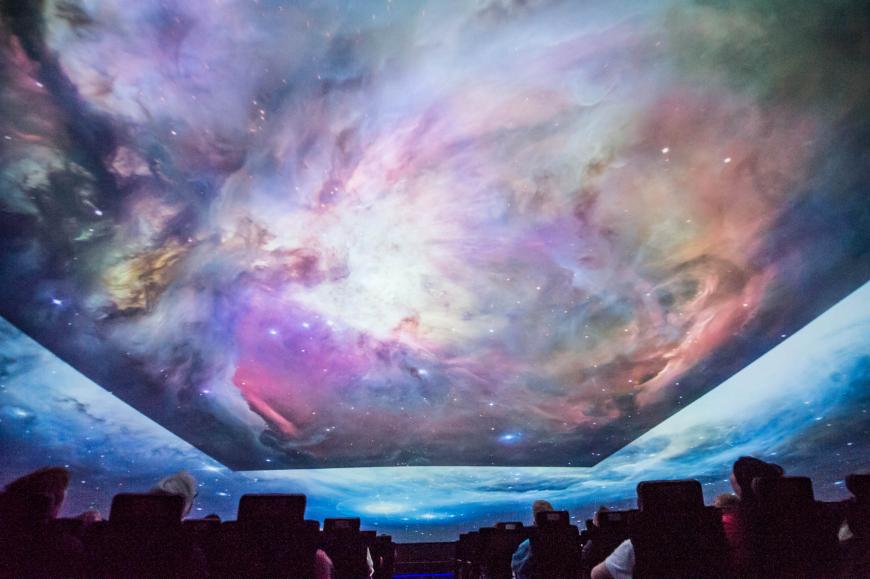 Many a scientist has credited his or her interest in the natural world to seeing the wonders of the universe unfold at a planetarium show. But to Mark SubbaRao, Director of the Space Visualization Laboratory at the Adler Planetarium, the modern planetarium can host much more than a sky show. As he pointed out in a talk given as part of the Research Computing Center’s Visualization Speaker Series, a planetarium is a multipurpose, high-resolution visualization facility, and it’s not limited to astronomy.

Devices used to show the movement of the heavens date back to antiquity, as attested to by the Antikythera Mechanism. But the first planetarium as we know it—a domed theater containing a sky-simulating projector—only dates back to 1923. (The Adler Planetarium, built in 1930, was the first planetarium in the western hemisphere.) The first generation of planetaria were built around the familiar dumbbell-shaped projector; the second generation added the ability to display other images on the dome. But Adler’s Grainger Sky Theater is a third-generation planetarium, containing 20 high-resolution projectors, two dedicated computing clusters, and lossless video playback.The modern planetarium, he says, is “a viewing platform for all astronomical information.”

All that projection power does more than just wow an audience. SubbaRao shared research that showed immersive displays, such as the 3D projection or a dome theater, can help viewers visualize complex processes in three dimensions. Viewers understood the structure of our galaxy better after watching a presentation projected in 3D than in 2D and retained the information better as well. (However, he cautioned that this didn’t apply to another presentation on supernovae, suggesting that not every topic is equally well suited to 3D.)

SubbaRao had three proposals for future applications of planetaria beyond astronomical education. One was to use them for improved scientific communication. (After all, he noted, an estimated 60 million people visit a planetarium each year.) Adler is collaborating with planetaria in Tucson, Denver, and Peoria on a live “dome cast ” featuring a lecture by astronomer Mike Brown on March 5.

A second proposal was that scientists use the visualization power of the planetarium to do research. He recounted a visit to Adler by group of astronomers behind a proposed space telescope mission that would attempt to block out the light from other stars, in the hopes that astronomers could directly image the planets orbiting them. Since light from our sun or Earth would overwhelm the faint light from the planets, much of the sky was effectively unobservable by this method. SubbaRao projected the map of the excluded zone onto the dome for the researchers, and then pointed out which of their remaining targets were close to other bright objects on the sky. It gave them a new, intuitive sense of the challenges their mission would face.

SubbaRao’s third suggestion was to expand the use of the planetarium to other sciences. For example, the Seismodome project uses a planetarium dome to represent Earth’s surface, as seen from inside the planet; viewers watch seismic waves propagate through over the planet’s crust. Likewise, Neurodome allows viewers to imagine themselves inside a human brain. SubbaRao invited University of Chicago faculty to be the first to use Adler’s resources to display their own science.

SubbaRao sees the great challenge in making these proposals a reality one of finding individuals who understand their not only their field but also current teaching methods and the projection technology. “The technology is there, but people are the problem,” he lamented. But if the excitement of the audience about the possibilities he outlined in his talk is any guide, those people may be arriving soon.