Not Just Seeing, but Understanding, Too 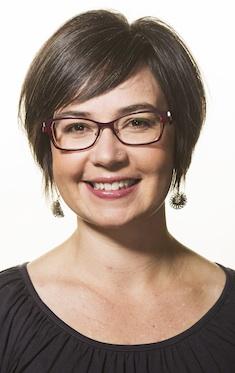 Data visualization doesn’t have to be limited to time-tested tools like bar charts and scatter plots, says Miriah Meyer, assistant professor at the School of Computing of the University of Utah. Her work focuses on “creating tools to help people understand their large datasets,” as she put it, and as described in a talk she gave as part of the University of Chicago Research Computing Center’s Visualization Speaker Series, those tools can be the key to truly understanding research.

Meyer shared an example of work she had done with a group of geneticists. They had been visualizing the connections between human and lizard DNA sequences using scatter plots, but even the researchers found the plots to be hard to understand. Meyer instead suggested visualizing the DNA sequences as wedges in a ring. (“It never fails to amaze me how much people love circles,” she observed.) Using this, the researchers came to a surprising realization—their model wasn’t working right. Had they stuck with the scatter plots, they might not have been able to take advantage of their intuitive understanding of their work.

When it comes to designing visualization tools, Meyer said, there is a tension between technique-driven goals (“What can we build?”) and problem driven ones (“What should we build?”). Coming up with a successful tool involves interviewing the end users, listening to their needs, and gaining their trust—“and as a computer scientist, I’ve never been trained in any of that,” she quipped. As example of taking the time to understand what the users want and need, she showed a project she had done with poets, finding a way a computer could analyze the structure of a poem. At first, some of the poets were concerned she was going to try to replace them, but Meyer spent time trying to understand exactly what they needed and find where computation could help them do what they were already doing manually. In the end, the poets didn’t just use her tools to study poems—they used them to explore creating new types of poems.

But even when tools are available, designers don’t always use them: Meyer found designers often preferred to come up with a design first and fit the data in later. She also found that in some cases, designers preferred to enter data manually, as a way of exploring it. Once committed to a design, though, it became hard to accommodate new data or justify backtracking and trying a new visual approach. The answer to this, she said, might be “the ultimate tool”—a do-it-all suite of visualization programs that could take one set of data and allow designers to play with it many ways. (She’s working on such a suite right now.)

“Designing for exploration is different than designing for explanation,” she cautions. Visualizations for the former can be aimed at people with a sophisticated background in the field in question, but visualizations for the latter need to designed to with engaging the public in mind—not just useful and accurate, but eye-catching and intuitive as well. Regardless of the aims, she feels that well-designed visualizations can have a major impact on the world of science. “At its best, visualization is one of these mechanisms that can cause disruptive change,” she said.