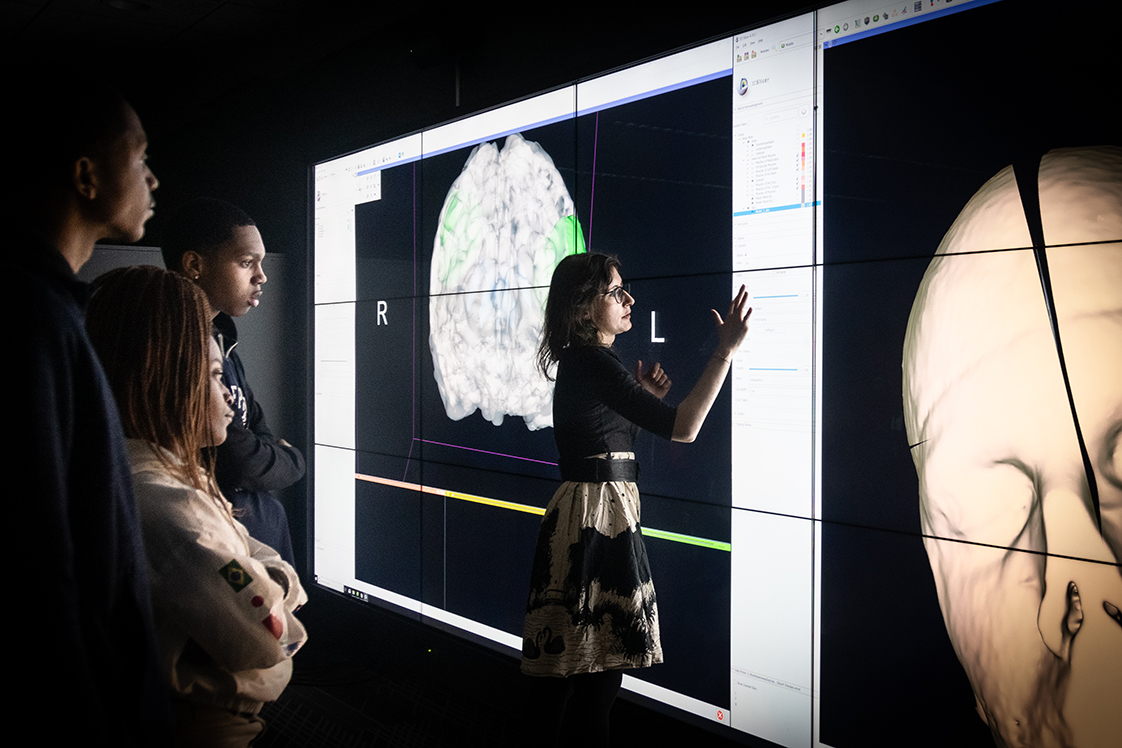 Until recently, the only way to look inside a human brain was rather...unpleasant. But students from Hyde Park Academy and the University of Chicago Charter School – Woodlawn Campus visiting the Research Computing Center for this year’s Brain Awareness Day got a close-up tour of the titular organ through a variety of advanced visualization technologies, including 3D, virtual reality, and the RCC’s new visualization wall.

On the new 24-foot-wide, 6-foot-7-inches tall, 37.3-megapixel wall display system in the new Media Arts, Data and Design Center in the renovated John Crerar Library, the students could use touchscreens to spin brains around, zoom in and out, and pull pieces apart to see inner anatomy. The demo revealed how today’s scientists utilize powerful computing resources to probe the inner workings of our own, much more advanced, inner computers.

“Our brains are far, far more powerful than the CPUs you’re holding,” said Jeffrey Tharsen, a computational scientist at the RCC. “All CPUs can do is process information, it takes in information in the form of 1s and 0s, decides what to do with them, and puts out output. That’s all that the machines do.”

Students split their day between the RCC Visualization Lab and the Brain Dynamics laboratory directed by Dr. Stephanie Cacioppo in the Biological Sciences Division at the University of Chicago Pritzker School of Medicine. In Cacioppo’s lab, the high schoolers received an introduction to MRI, EEG, and the other methods used by physicians and scientists to capture images and the activity of the brain, in order to learn how it shapes behavior.

Back at the Visualization Lab, the students experienced how that information was transformed into 3D or virtual reality programs that allow you to “dissect” real images of a brain into its constituent parts. They learned how these technologies are not just for fun, but increasingly used by neuroscientists and neurologists to find tumors, diagnose disease, or prepare for brain surgery.

They also experienced a simple version of a brain-machine interface, where suction-cup electrodes placed on a volunteer’s hands measured the electrical activity from opening and closing their fist and sent it to a nearby computer. Similar transmissions, both from muscle to computer and from computer to muscle, are being used to power advanced prosthetics and wearable devices that will soon come to market.

Other portions of the program informed students about how the biggest “brains” of the scientific world — data centers and computing clusters, such as RCC’s Midway — power today’s largest scientific collaborations. Yuxing Peng, another RCC computational scientist, used the visualization wall to explain the CERN Large Hadron Collider, the International Space Station, and other global projects that generate massive streams of data, shared for simultaneous analysis at hundreds of laboratories.

Peng traced the history of today’s of supercomputers back to the ENIAC machine, the first general-purpose electronic supercomputer, used by scientists in the 1940’s to invent atomic technology. By comparing today’s devices to yesterday’s room-sized machines, he left the students with an important challenge.

“Nowadays, our cell phone is faster than that computer, what will you do with that power?,” Peng said. “This new technology can change our lives; we are now in an ocean of digital information. Welcome to the new digital era.”