The Most Powerful Computer 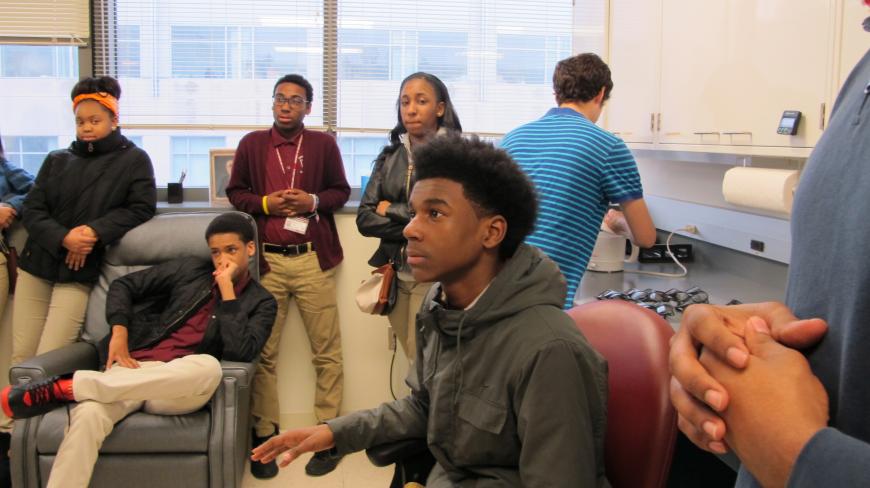 Jeff Tharsen, a digital humanities computing consultant with the Research Computing Center, was introducing visiting ninth graders from the UChicago Charter Woodlawn Campus (UCW) to the concept of multi-core computing. Their cellphones have one core; their laptops probably have two or four, which allows them to process information faster. But RCC’s Midway supercomputing cluster has 32,000 cores, he explains, to handle enormous data sets that would paralyze a smartphone. The students are duly impressed. Then he looks around, counting. “And yet, there are 14 computers in this room more powerful than Midway.”

The students sat there, puzzled, until a realization dawned over one. “It’s us,” the boy said. Tharsen nods; as powerful as our computers are, he explained, the human brain is vastly more complex. “Don’t sell yourselves short,” he says.

This exercise was part of Brain Awareness Day, an annual collaboration between the Research Computing Center and the High Performance Electrical NeuroImaging Laboratory (HPEN), hosted in the Center for Cognitive and Social Neuroscience (CCSN), and facilitated by the Office of Civic Engagement. Brian Awareness Day is part of Brain Awareness Week 2016, an annual global campaign to increase public awareness of the progress and benefits of brain research. This year, RCC and HPEN welcomed students from UCW as well as Kenwood Academy to campus to learn more about their brains.

After Tharsen had made his point to the students, Dr. H. Birali Runesha, director of RCC and assistant vice-president for research computing, showed them the interior of a computing node, similar to the ones used on Midway. Each one is about the size of a pizza box, he noted—but imagine a room full of stacks of pizza boxes. That’s what Midway looks like.

Next, RCC student worker Matt Best showed off a hands-on display of his own—actual brains, human and rhesus, preserved in formaldehyde. (Best is a graduate student in the Committee on Computational Neuroscience.) He also discussed his own research, on how the brain controls arm movements. “The thing I really wanted to do was study catching,” he said. “It’s really crazy how people can catch things.” Finally, Brian Keating, an image analysis and data visualization consultant, demonstrated students how computation makes studying the brain possible. Magnetic resonance imaging (MRI) scans only became possible in the 1970s, he explains, just as computers were becoming integrated with medicine, and the two “grew up together.” He shows off the Zar Room’s 3D projection capabilities as well, by displaying and manipulating MRI data for the students.

Midway through the morning, RCC swapped the UCW kids for the students from Kenwood, who had been guests of HPEN. The high-schoolers were welcomed by Stephanie Cacioppo, assistant professor of psychiatry and behavioral neuroscience, and John Cacioppo, the Tiffany and Margaret Blake Distinguished Service Professor of Psychology, who together run the lab. (John Cacioppo also directs the CCSN). To emphasize the complexity of the human brain, John Cacioppo told the students their brains have something like 150 trillion synapses; if you were to count them all, at one synapse a second, how long would that take? (“Two minutes!” jokes Stephanie Cacioppo.) The students knew it had to be higher, but are appropriately astonished when he tells them it would take almost 5 million years to do so. He emphasizes that scientists are only beginning to understand the workings of the brain, and that completing that work will be up to future generations. “We’ve made enormous progress,” he says, “but more progress depends on you.” Second-year graduate student Elliot Layden expounded further: unlike a computer, in which memory is stored as zeros or ones, synapses can hold many states at once. But even of each synapse was limited to a zero or one, the human brain could hold about 105 TB of data. He then gave the students an overview of the many imaging technologies used to study brains—MRI, functional MRI, diffusion MRI, and voxel-based morphometry (VBM).  He even showed a 3D cutaway of an MRI scan of a head—his own.

Despite all of these ways to image the brain, Layden said, “we don’t understand consciousness.” A different technique is providing researchers with clues to solve that mystery: electroencephalograms (EEGs). Layden explained that EEGs had helped scientists discover microstates, clusters of brain activity suspected to be the building blocks of thought.

To show students how an EEG is done, fifth-year graduate student Ivo Gyurovski measured Layden’s head, then fitted him with a net of electrodes, soaked in a shampoo and salt solution (to improve conductivity). Then the everyone gathered around Gyurovski’s computer, where they could see Layden’s brain waves spiking as he blinked, moved his eyes, and ground his teeth. As recently as the ‘90s, Gyurovski  said, a standard net had just four electrodes; thanks to improvements in data collection, the one Layden was wearing had 128. 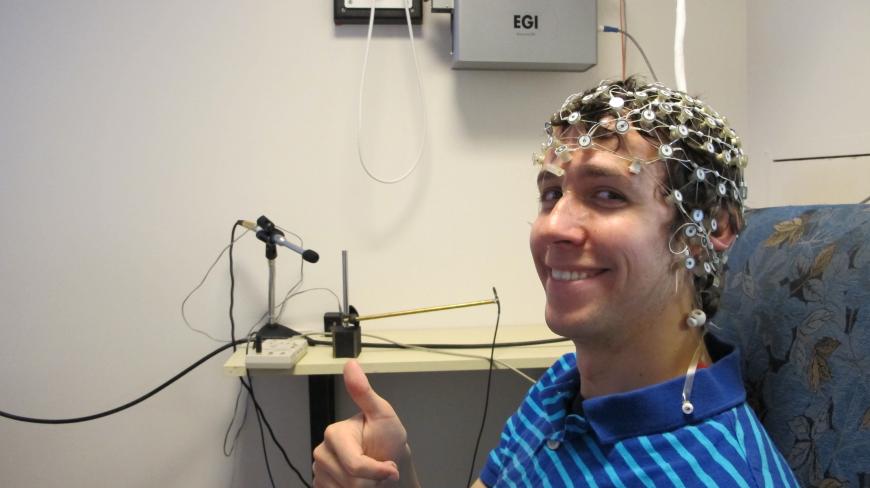 Finally, both schools met up in the Zar Room for a pizza lunch, and students received handouts from both RCC and HPEN. Brain Awareness Day 2016 marks the fourth year that Kenwood Academy students have taken a break from their classes to come to campus to participate in the event, and the first year that students from UCW have participated.