Mind Bytes 2019: The Tipping Point for Computational and AI Research

We are rapidly approaching the point where the researchers who make use of advanced computational resources will outnumber those who do not. At the fifth annual Mind Bytes Expo and Symposium, presented by the University of Chicago’s Research Computing Center, there was a recurring note of concern for this second group.

In response to the news that 577 UChicago faculty members are now active users of RCC services, Vice President for National Laboratories Juan de Pablo expressed concern about the rest of the faculty: “They’re running a race with only one leg,” he said. And in his keynote on the future of artificial intelligence for science, Associate Laboratory Director at Argonne National Laboratory and Professor of Computer Science Rick Stevens offered a word of warning from a colleague.

But overall, the 2019 Mind Bytes was an inclusive celebration of the impressive progress of computational science at UChicago since the founding of the RCC in 2012. The biggest announcement, made by Vice Provost of Research Ka Yee Lee, was the procurement of Midway3, a new high-performance computing cluster for UChicago research.

But even more exciting was the surge of interest around campus in capitalizing upon that computational power, with more than 4500 registered RCC users from every corner of campus. Through lightning talks, posters, demos, and a multidisciplinary panel, the event highlighted how UChicago researchers deploy deep learning, data analysis and visualization, high-performance simulations, and other tools and resources as part of their everyday workflow.

“Artificial intelligence is increasingly being used in many disciplines, and the integration of data and high-end computing is really critical in enabling transformative research,” said H. Birali Runesha, Assistant Vice President for Research Computing and RCC Director. “The RCC will continue to work with campus researchers  to understand and support their research by providing access to computational platforms and advanced technical support, that will enable them to undertake research and analysis that would not otherwise be possible.”

AI In The Lab: Tomorrow’s Must-Have Tool For Science

As recently as five years ago, the future of artificial intelligence for scientific research was murky at best. In his introductory comments, de Pablo admitted to writing an NSF report on AI for science at that time, which concluded that its impact would be minimal — a prediction he described at Mind Bytes as “very, very wrong.”

That reversal was apparent in Rick Stevens’ keynote talk, which began with self-driving automobiles and ended with a vision of a “self-driving” laboratory, autonomously conducting experiments chosen by AI based on powerful supercomputer simulations. 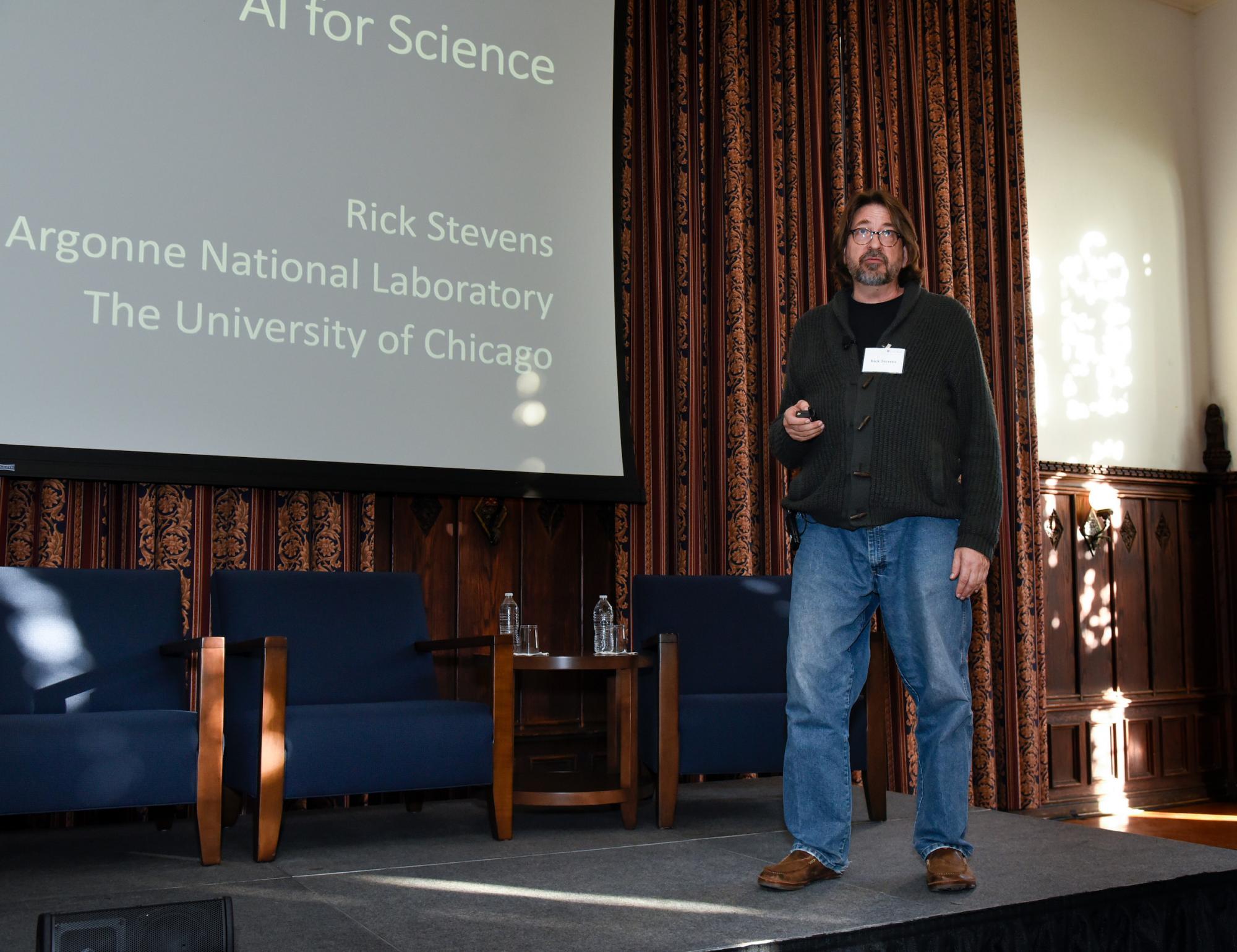 “We want to find a way to teach these AI systems about what is already known about science,” Stevens said. “Can we teach it to read the literature, so it has a built-in background knowledge, and can it then use that to build better models? Can we use it to automate end-to-end experiments: from designing experiments to conducting the experiments to analyzing the experiments? And can we use it to generate theory? We don’t know how to do these things today, but it is what we hope to be able to do in ten years.”

In order to help realize that future, the Department of Energy soon hopes to launch a new, multi-billion-dollar AI For Science Initiative. The effort will be focused on advancing the applications, software, foundations, and hardware needed for maximizing the role of AI in scientific research, for uses such as discovering new materials and chemicals, building better climate models, and chasing down new drugs for treating cancer and antibiotic-resistant disease.

Yet even today, machine learning approaches can tackle many tasks as well as humans, and even outpace us on some challenges. The explosion of data and the sudden rise of deep learning — which mimics the layers of the human brain to extract both simple and complex representations from data — have turbo-charged computer vision, language translation, and the creation of synthetic media in recent years. Given these approaches, enough data, and enough processors, computers can now learn how to play the game Go better than any human in less than a month, Stevens said, and can even pass advanced science and reading comprehension tests.

For research applications, these innovations have already proven adept at protein folding, building new predictive models for material and chemical properties, and generating synthetic data for physics and astronomy experiments (see lightning talks section for more). But Stevens said many new AI breakthroughs are on the horizon, including the merger of machine learning approaches with upcoming exascale computers such as Argonne’s Aurora.

“This is going to be an amazing machine for simulation, for data, and for machine learning,” Stevens said. “We know there’s all kinds of ways to wire together high performance computing and AI. You can use AI to steer simulations, to enhance simulations, we can use simulation data to train AI, we can go inside simulations and replace parts of the code with machine learning models. For simulation problems, AI can be a dramatic accelerator without losing accuracy.”

That spirit of transdisciplinary computational research was well represented at Mind Bytes through a session of lightning talks by UChicago faculty and over 50 posters from RCC users. In his introductory remarks, H. Birali Runesha pointed out the representation of nearly every academic unit on campus — including, for the first time, the Divinity School. The talks and posters reflected that diversity, showcasing innovative projects that ranged from archeological studies of the ancient world to next-generation approaches for studying brain activity, protein structure and function, and the effect of climate change on the global economy.

The lightning talks illustrated how computational approaches go beyond what’s currently described as artificial intelligence, into areas of data science, simulation, and advanced data analytics. Despite the buzz around AI, more “classical” uses of high-performance computing remain important for running models at high speeds that enable scientists to study complex systems without waiting hours, days, or even weeks for results.

Tobin Sosnick, Chair of the Department of Biochemistry and Molecular Biology, talked about designing tools to study the complex process of protein folding on a laptop, with local models backed by complex simulations performed on RCC’s Midway cluster. Lars Peter Hansen, The David Rockefeller Distinguished Service Professor in Economics, Statistics and the Booth School of Business and recipient of the 2013 Nobel Memorial Prize in Economics, talked about how RCC resources help him develop new models that take climate change and uncertainty into account for making economic predictions and calculating the social cost of carbon.

In addition to helping UChicago researchers’ own work, the talks also showcased how RCC resources can be used to enrich science beyond campus boundaries. Stephanie Palmer, an Assistant Professor in the Department of Organismal Biology and Anatomy, uses RCC to both analyze data from recordings of rat retinal activity and host data in the Chicago Motion Database, a resource she created to share high-definition video of natural scenes for visual perception research. 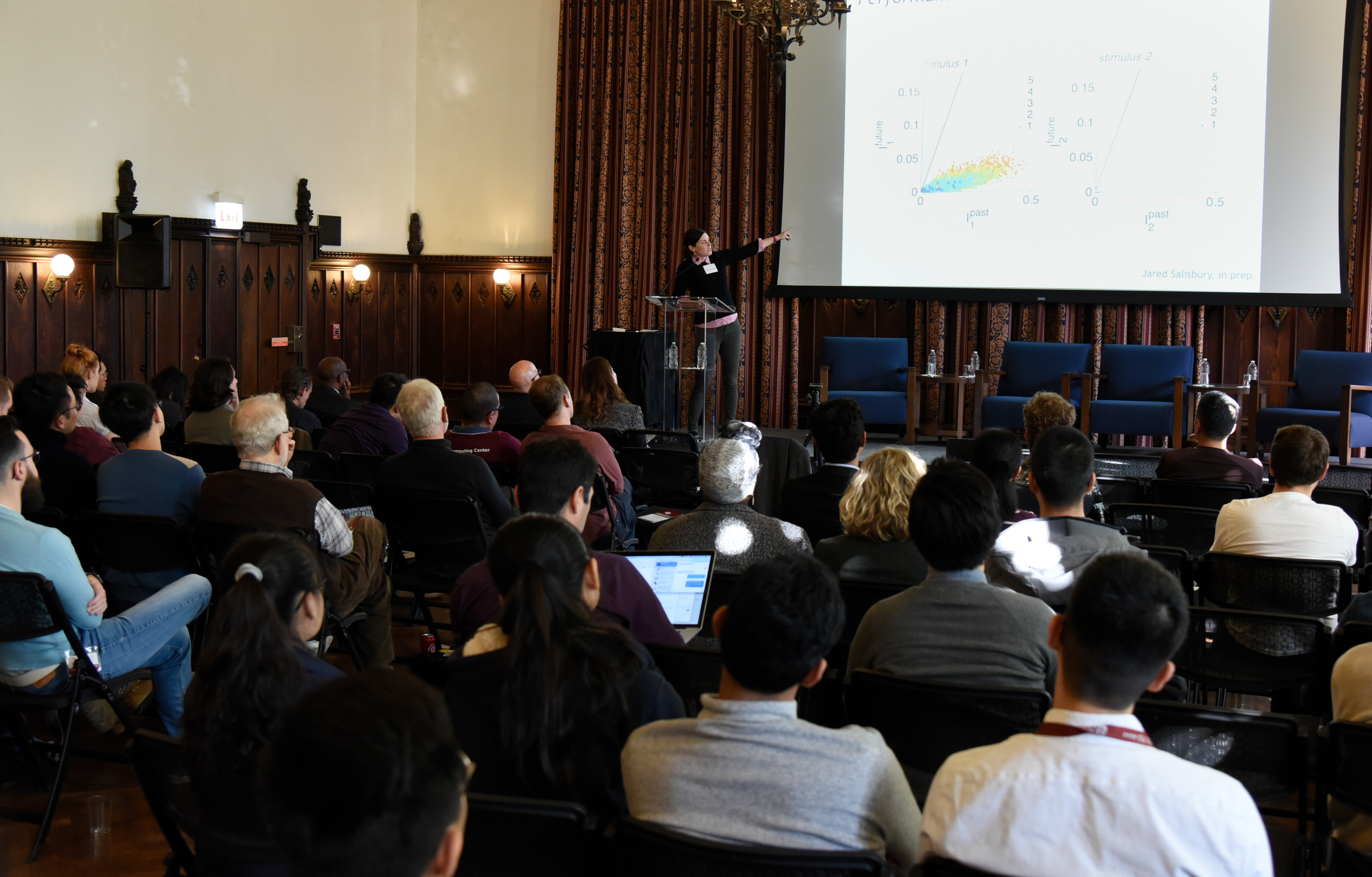 “We’ve used RCC to expand our research platform and collaborations locally and globally,” Palmer said. “Without the RCC, I don’t think we’d have the results we have now or the ability to share our data with our broader colleagues.”

Other open-source tools developed by UChicago laboratories and RCC scientists include OCHRE, a database platform for archeology and other cultural/historical studies, presented by Professor of Near Eastern Archaeology David Schloen, and workflowr, a package for organizing and publishing research results described by Matthew Stephens, a Professor of Human Genetics and Statistics. The latter tool helps scientists publish a website including links to data and code for every published paper — a standard that will become increasingly important as computational approaches spread to more fields of inquiry.

"A really ambitious goal for me, is when a lab publishes a paper or a PhD thesis, that we would have an accompanying website and code that documents what we did and what results were," Stephens said. "I feel like it's a real benefit that the next student can come along and get a real head start by building on what was done before, which is what we all should be doing. But if you want to do this, you have to think up front and plan for it in advance."

Winning poster  - Characterizing relationships between working memory and the environment in childhood,