To understand the culture and technology of the past, many archeologists now deploy the technology of the modern world, using drones, GIS, databases, and other digital tools to study ancient civilizations. On October 18th, 18 students from Kenwood Academy High School learned about these cutting-edge approaches from experts at the Oriental Institute (OI) and the UChicago Research Computing Center (RCC) during the inaugural Digital Archeology Day.

The half-day event featured hands-on experience with tools used by OI researchers at expeditions in countries such as Turkey, Israel, Peru and Niger. Where archeologists used to painstakingly document their excavations manually, they can now take advantage of modern techniques to collect, curate, and study artifacts in the field.

“Archeology is a destructive process,” Miller Prosser, a research database consultant with the OI, told students at the start of the day. “We try to preserve sites as we go along, and we used to use pencil and paper, drawing by hand what we found and where we found it. But more and more, we’re adopting digital tools: computers, drones, and 3D scanners.” 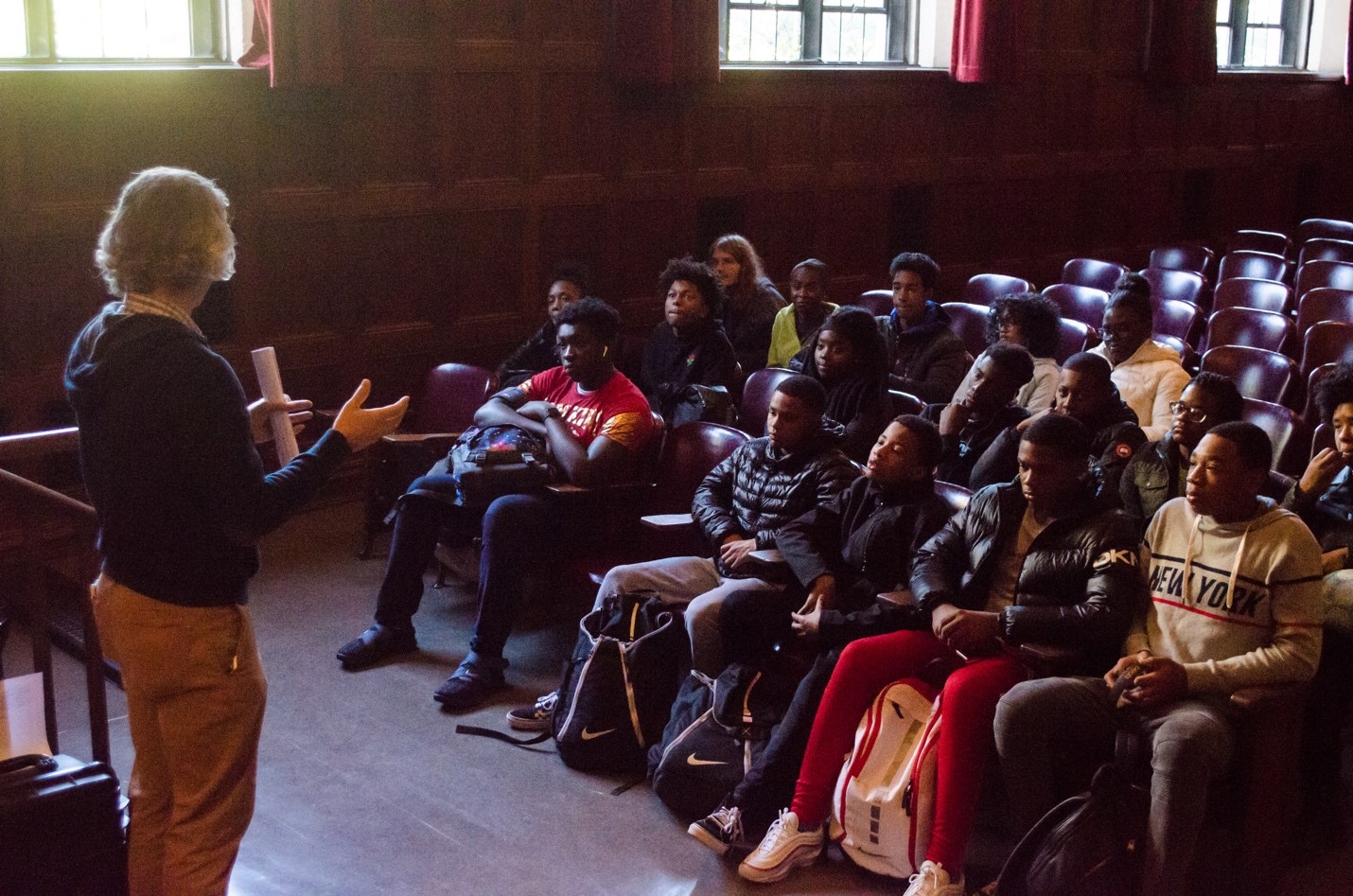 Students rotated through a series of stations that illustrated this shift, from trying old-school methods in the simulated dig site of the Kipper Archaeology Discovery Center to flying a “quadcopter” on the Midway outside of Rockefeller Chapel. At each step of the way, they learned what archeology can tell us about the distant past, and how these modern technologies allow researchers to learn even more about people, culture, and cities from thousands of years ago.

At the dig site, modeled on the famous Tel Megiddo site in Israel, students used spades, brushes, and a sifter to find a metal mask, pottery, and a wearable canteen in small plots of sand. They then used the same approach used by Oriental Institute archeologists since the early 20th century: drawing each artifact and taking notes about its material, decoration, where they found it, and what they thought it might have been used for by people in the Bronze and Iron Ages. 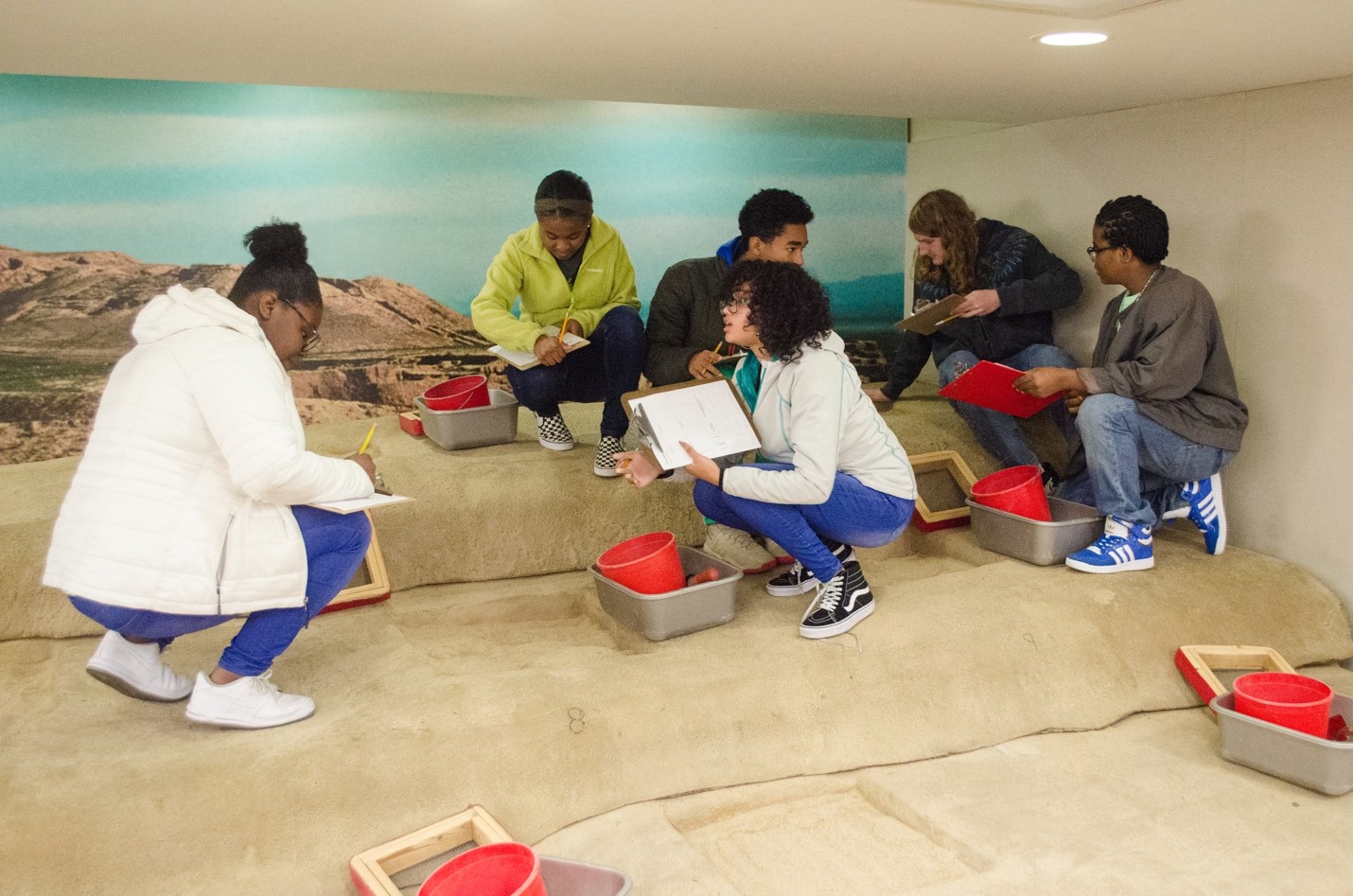 But upstairs, students used an important tool for current OI expeditions: the Online Cultural and Historical Research Environment (OCHRE). Supported by the University of Chicago, the database allows researchers in the field to immediately log the details of any significant object they find, linking it to the precise location of its discovery, digital images, and other important data points. Guided by Sandra Schloen, a research database specialist on the OCHRE project, students used laptop computers still dusty from recent field use to explore data from a site in Northern Israel and add their own imaginary find — then generate an identification sticker using a heavy-duty barcode printer nicknamed “Thor.” 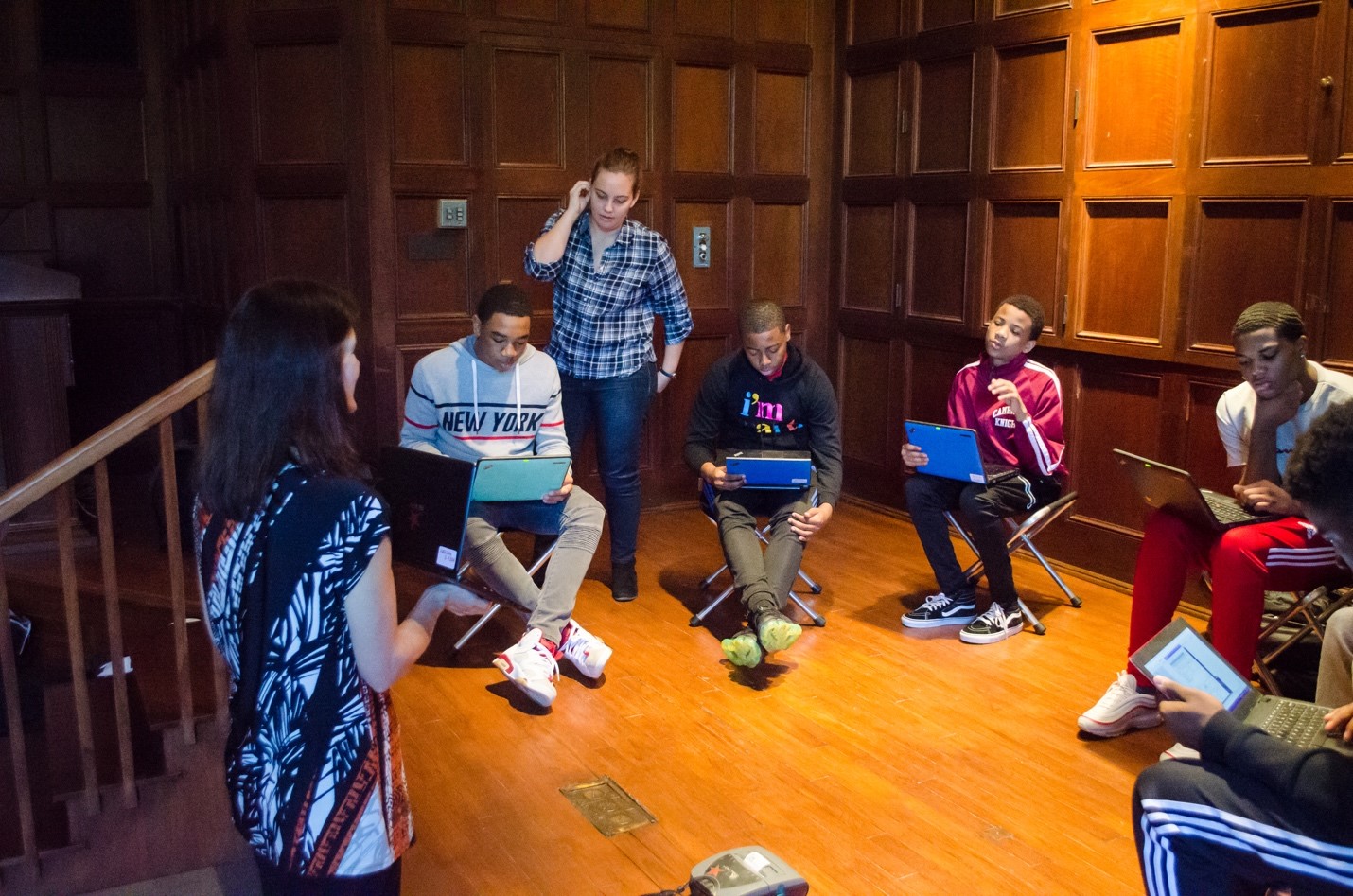 To create the precise plots of where artifacts are discovered, archeology teams have added a new job title: drone pilot. On the Midway, research assistant Andrew Wright showed off the camera-mounted quadcopter he used to capture overhead surveys of dig sites, giving students the chance to control the aircraft and take group selfies from above. 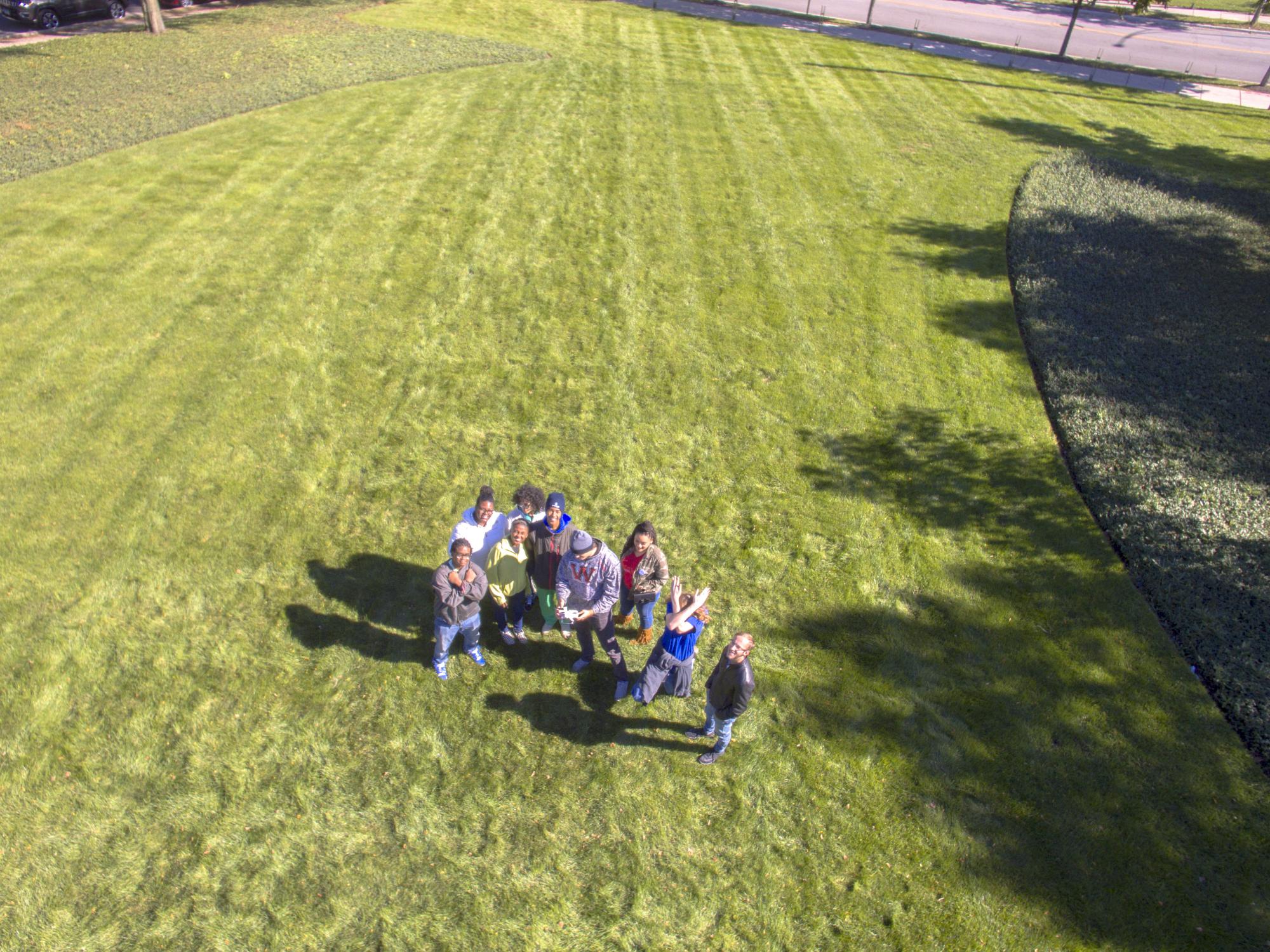 Even the tour of the Oriental Institute museum touched upon how new technology has changed archeology, with a stop at the coffin of the mummy Meresamun. In collaboration with University of Chicago Medicine radiologists, OI researchers have used CT scans to examine the remains inside the ornately-decorated casket, allowing for high-resolution study without disturbing or damaging the artifact. 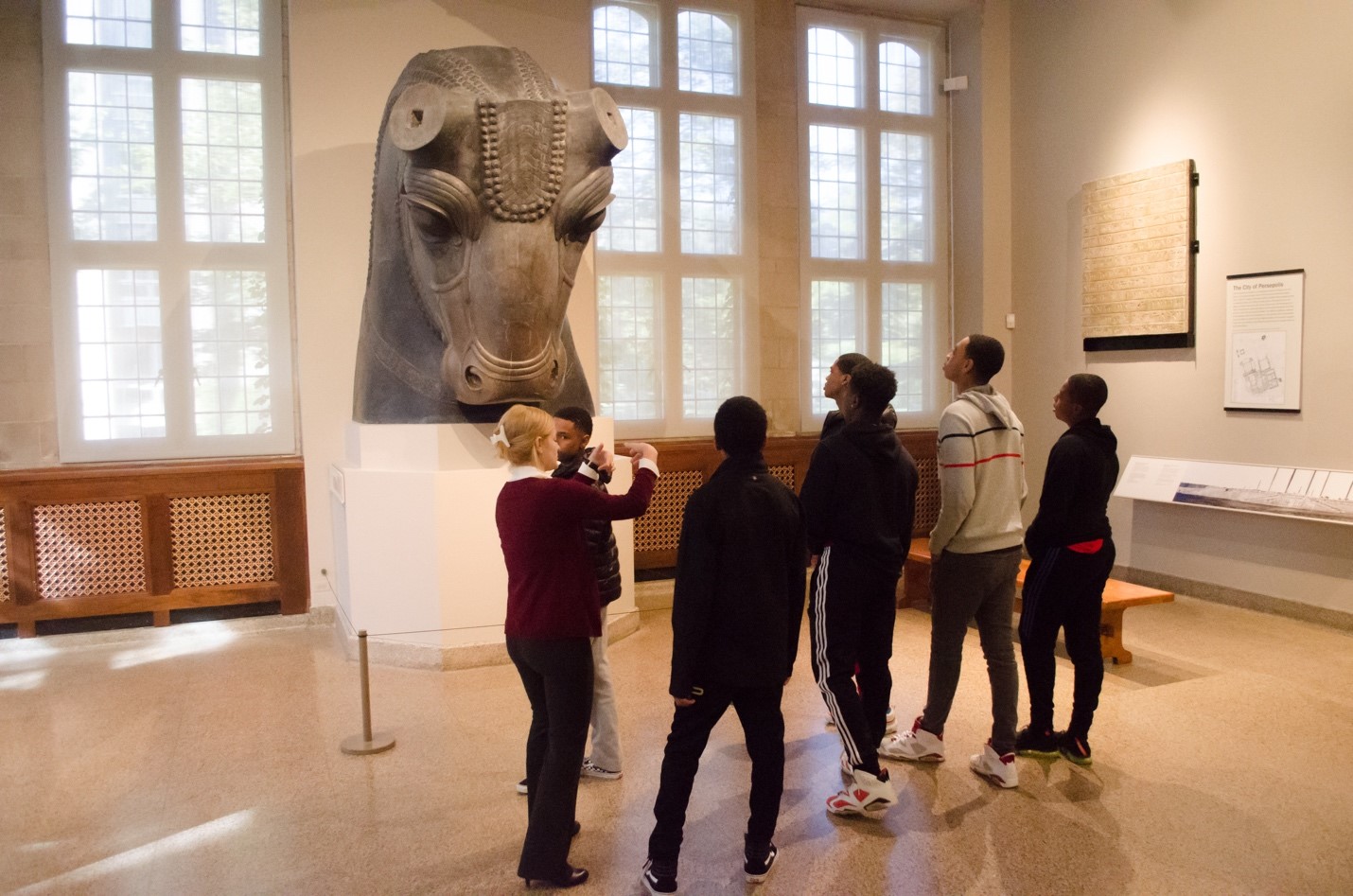 But the event’s take-home souvenir for each student demonstrated that even the simplest data can last for centuries. Using blocks of clay and a wooden stick, students each made their own tablet written in cuneiform, a writing system that was invented in southern Iraq sometime in the second half of the fourth millennium BCE. The exercise underscored that humans have created and used technology to document themselves since the dawn of civilization — and that digital archeology is just the latest addition to the research toolbox. 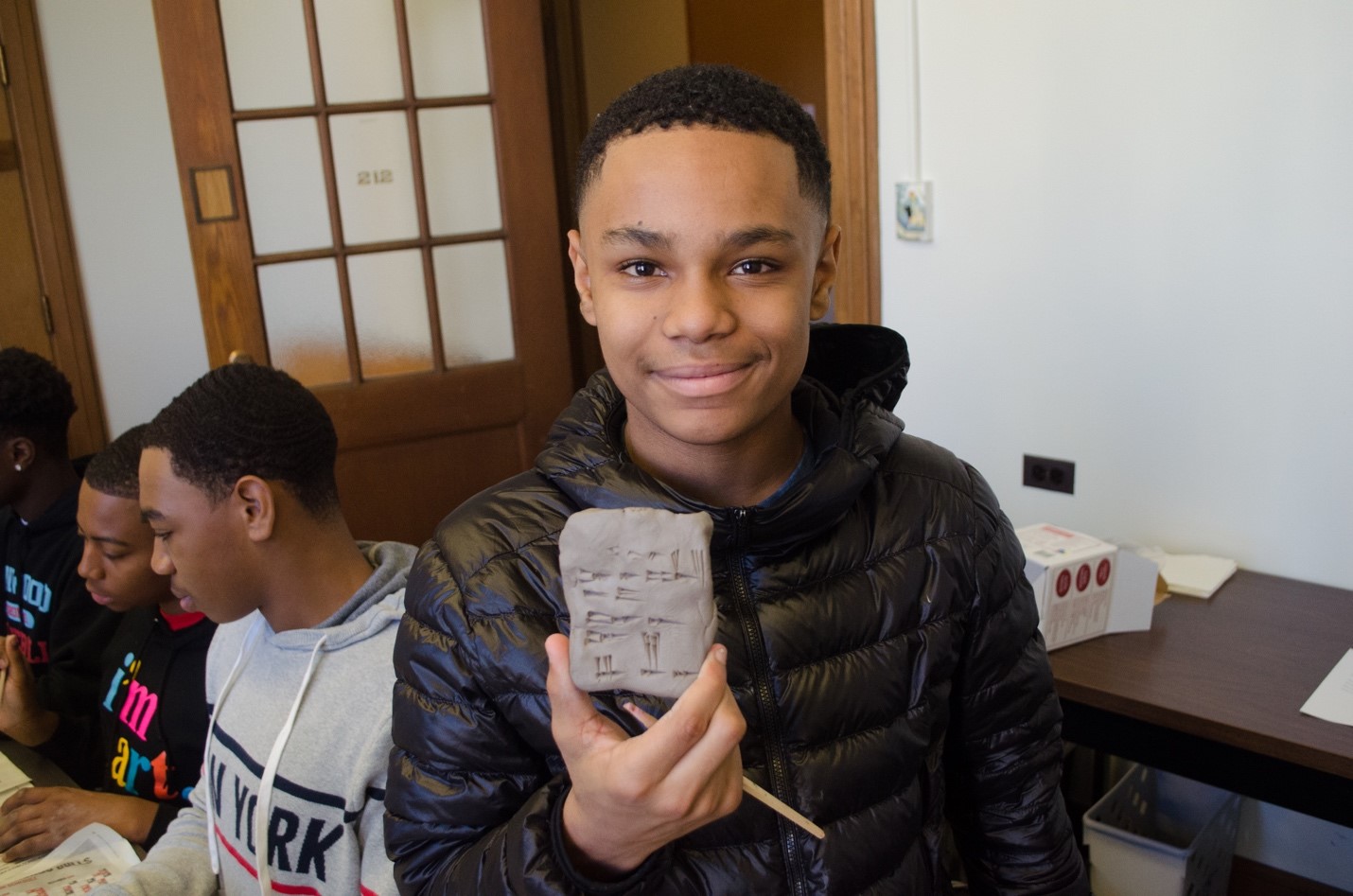 Digital Archeology Day, 2018, was part of the outreach program of the NSF funded project CRESCAT (Computational Research Ecosystem for Scientific Collaboration on Ancient Topics) to introduce high school student to tools used for ancient studies. The event was run by the RCC and Oriental Institute and facilitated by UChicago Civic Engagement.