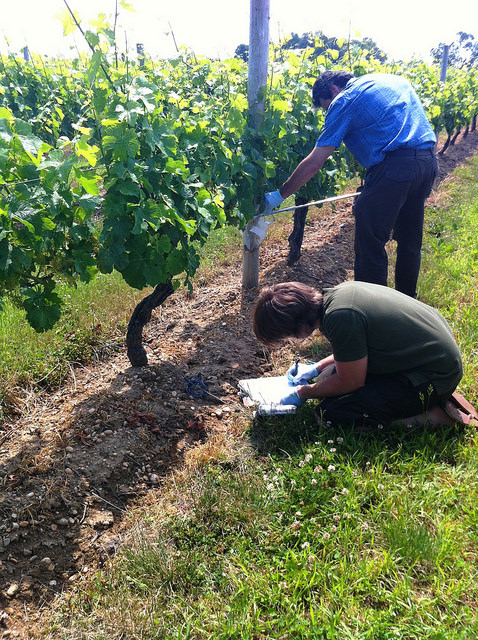 When we drive past sunny fields of grapes, we might think we’re seeing how they’re doing—but much more is going on invisible to the human eye: vines and roots teeming with bacteria, viruses and fungi that all impact how those grapes will grow.

A new study of the microbes growing in and around grapevines, led by researchers from the U.S. Department of Energy’s Argonne National Laboratory, surveyed microbes on the plants and their influence on the plants' health. The study is part of a larger push to understand the roles microbes play in agriculture.

Scientists are hard at work cataloguing the microbes that live in and around us and influence everything from oceans, rivers, and the atmosphere to human homes. While a few known strains of bacteria can destroy plants, it’s likely that hundreds to thousands of other species actually help them—living in a complex, interwoven community that, when working at its best, can help the plant survive tough times

A team led by Argonne microbial ecologist Jack Gilbert wanted to explore these communities. In research that could lead to ways for farmers to encourage healthier plants without pesticides, Gilbert's team, in collaboration with researchers at FMC Agricultural Solutions and Sparkling Pointe Winery, sampled microbes in the soil, roots, leaves, flowers and grapes from the plants in five New York vineyards over the span of two years, including fall, winter, spring and summer.

“One of our key findings was that the vast majority of the bacteria come from the soil,” said Argonne researcher Sarah Owens.  “The leaves, roots, flowers, grapes—all had the same bacteria but in different abundances, which may suggest that different parts of the vine are recruiting different species.”

For example, plants can encourage certain microbes to grow by producing chemicals or nutrients that those microbes like, she said.

However, each vineyard had its own unique microbial signature, Owens said, “even when the vineyards were just half a mile down the road from one another.”

They also tracked differences associated with the soil's pH and its proportions of carbon and nitrogen.

“The type and content of soil, the climate, the plant varieties and how the vineyard is managed—these are all expressed in the microbiome, and we have to understand them if we want to translate this knowledge into practical applications,” Owens said.

“The next step," Gilbert said, "would be to see if we can find microbes that would help farmers specifically manipulate the properties of a crop—more fruit or more drought-tolerant, for example.”

To do so, they need to first predict which bacteria might be helping the crop, based on just the genomic data. Argonne postdoctoral researcher Pamela Weisenhorn, also a study author, is working with Argonne computational biologist Christopher Henry to develop methods to tease out community metabolic models from metagenomic data. By feeding the data through software that flags genes with known functions, Weisenhorn can pick out organisms that appear beneficial and build simulations of how they might interact with the plant and what they’re producing. This narrows the list of potential bacterial partners for field trials.

“Ultimately," Gilbert said, "we hope to give farmers more information on the invisible—how plants use microbes to respond to climate and conditions.”

And perhaps in the process they could also give winemakers more clues to pin down exactly what makes up the elusive terroir, or taste of a wine from grapes grown in a particular region—a mystery that has tantalized oenophiles since winemaking begun.

In addition to Gilbert, Owens and Weisenhorn, other Argonne authors on the study included Jarrad Hampton-Marcell and first author Iratxe Zarraonaindia, then a postdoctoral researcher at Argonne, now at the Basque Foundation for Science. Other study authors came from the FMC Center for Agricultural and Environmental Biotechnology, the University of California at Davis.

The study, "Soil microbiome influences grapevine-associated microbiota," was published in the American Society for Microbiology's ­mBIo and was supported by the Earth Microbiome Project, the FMC Center for Agricultural and Environmental Biotechnology, and a postdoctoral research grant from the Basque Government. The University of Chicago Research Computing Center provided computational resources.

See the original story at http://www.anl.gov/articles/researchers-study-grapevine-microbiota.