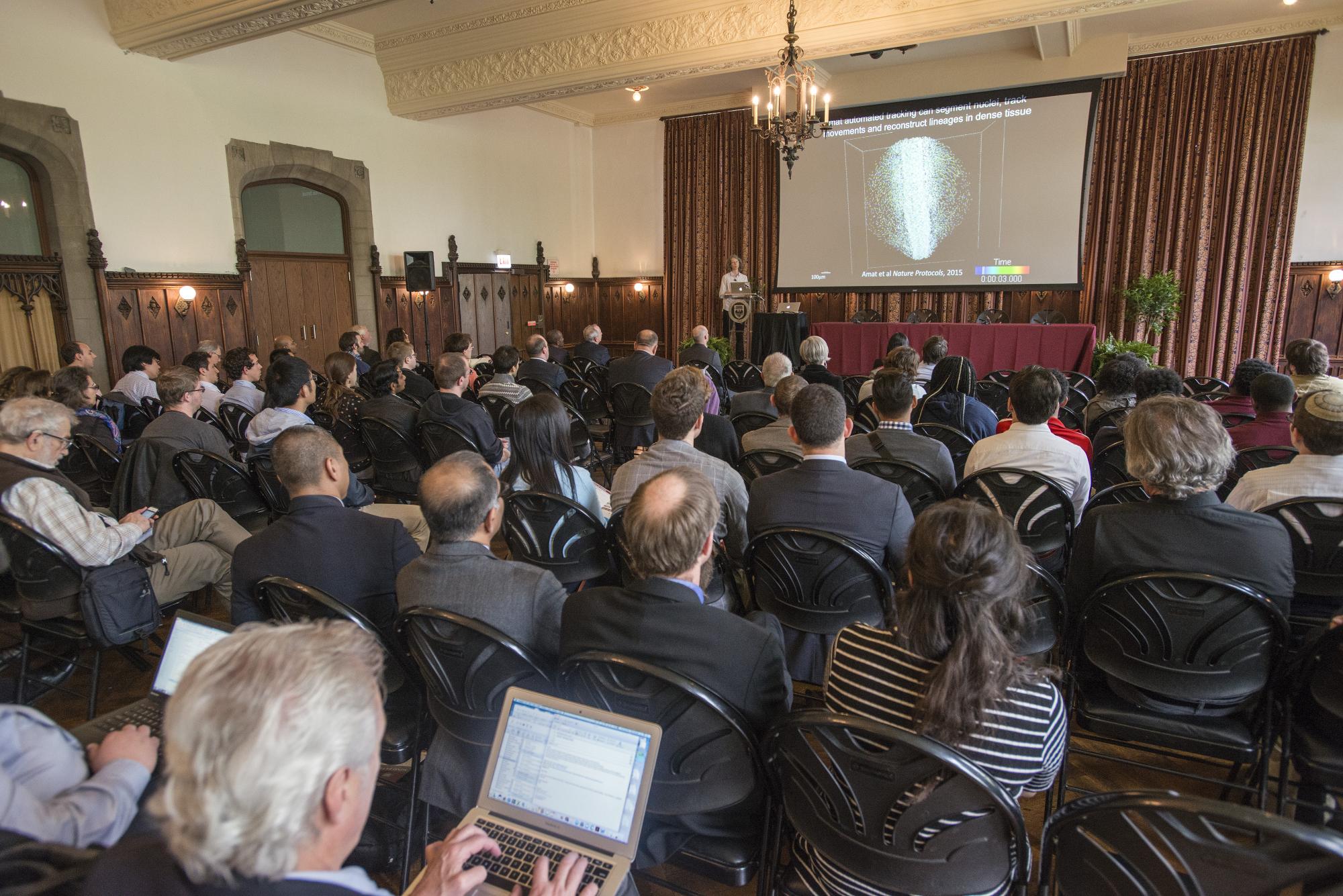 In practically every field of research today, computation is no longer a novelty. In chemistry and neuroscience, social science and public policy, humanities and business, computational techniques are often now the equal of the more storied approaches of theory and experimentation. At the 3rd annual Mind Bytes conference, hosted by the University of Chicago Research Computing Center (RCC), presentations and panels demonstrated how “computational science” has become merely “science” for many different disciplines. 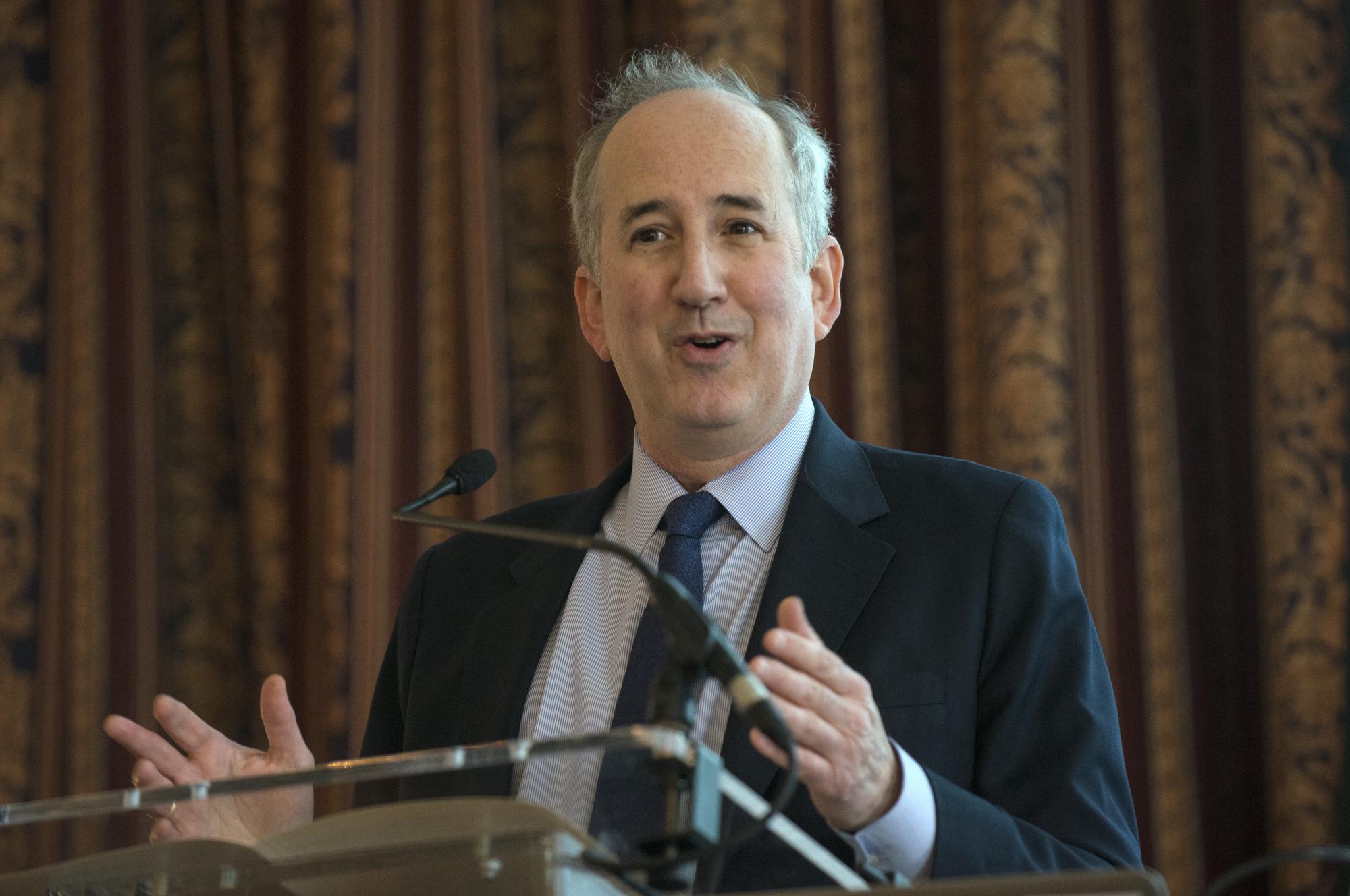 “Today, computation, data science and high-end computing are enabling transformative research in almost all fields,” said Eric Isaacs, Executive Vice President for Research, Innovation and National Laboratories at the University of Chicago in his opening remarks. “Computing and computation, including data analytics and visualization, are fueling ambitious new studies in the sciences, social sciences, the humanities and the arts, including astrophysics, art history, materials science, ecology, and archeology, to name a few.”

That expansion is reflected in the campus-wide usage of the Research Computing Center, which has surged to more than 350 UChicago faculty users and 2616 active users, said RCC director H. Birali Runesha. At Mind Bytes, a session of lightning talks demonstrated the versatility of those resources, and users presented 57 posters -- a new record -- on RCC-assisted research in quantum mechanics, evolutionary biology, violence prevention, climate change, materials science, and more. Poster award-winners included a textual study of economic ideology in Chinese newspapers and an exploration of how evolutionary computing algorithms can help build a virtual immune system for developing personalized therapies. 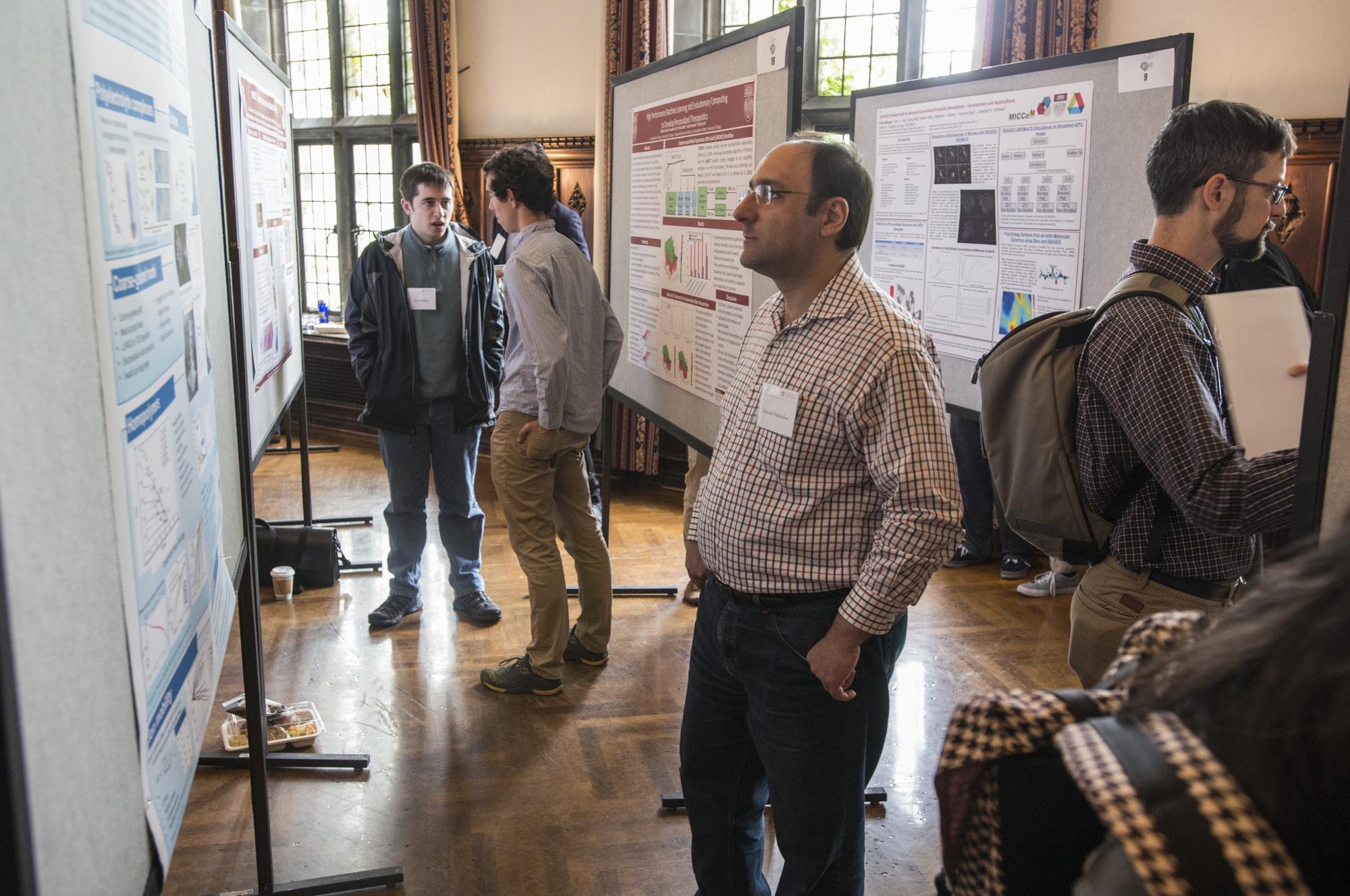 The RCC is also used by Nicole Marwell, Associate Professor in the Social Service Administration, to study the distribution of social welfare programs through the analysis of thousands of government contracts, and as the development platform underlying GeoDa, the popular spatial data analysis software created by Luc Anselin, Stein-Freiler Distinguished Service Professor of Sociology. At a global scale, RCC is at the core of international science efforts such as Xenon1T, an ambitious experiment to search for dark matter with a detector deep beneath an Italian mountain. 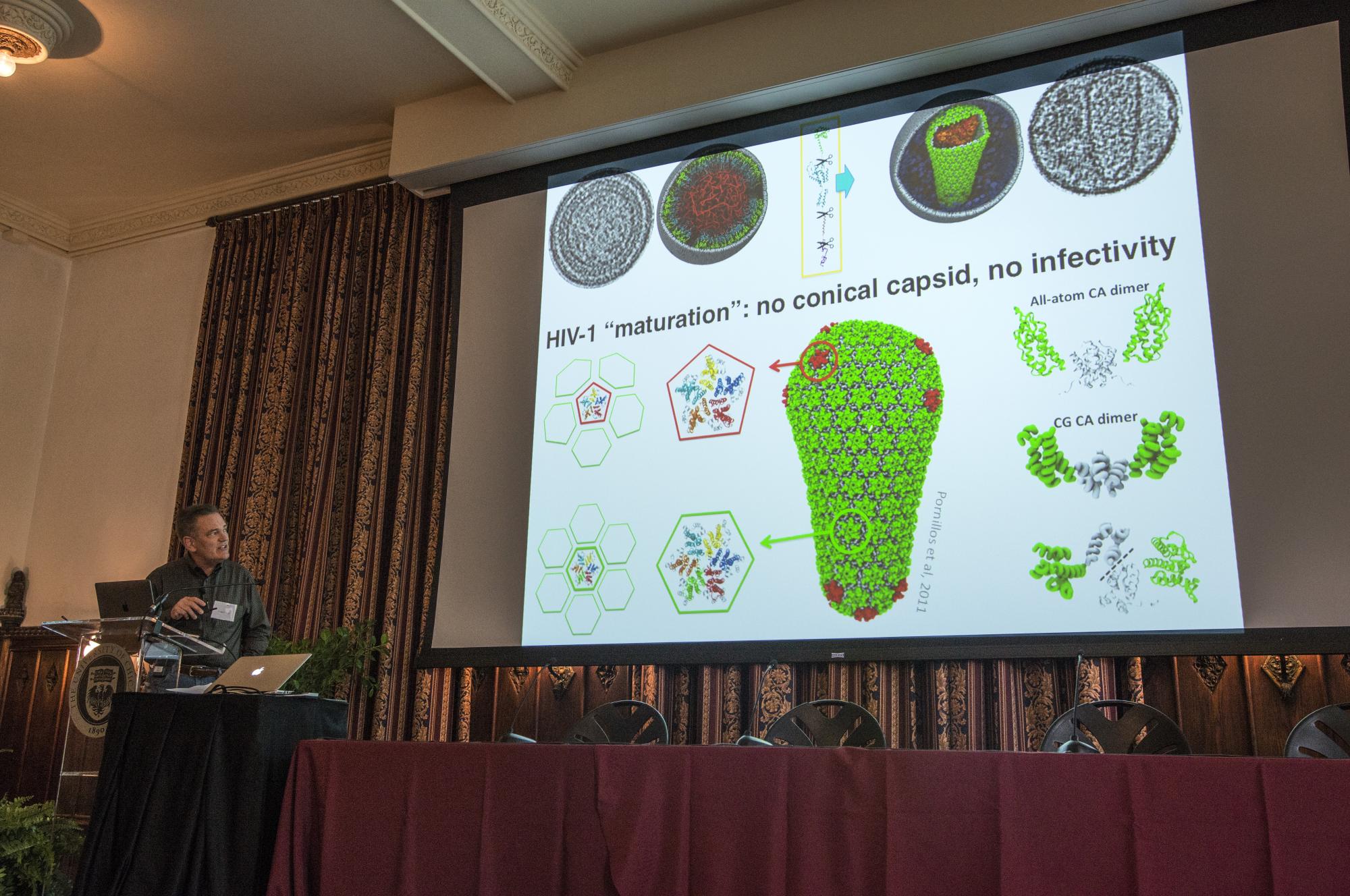 “The great advantage in RCC is that they are very research-oriented and they are doing whatever they can with as much flexibility as possible to make my program successful,” said Luca Grandi, Assistant Professor at the Kavli Institute for Cosmological Physics and primary investigator of the XENON1T project.”It helped me to bring an important slice in cutting edge science to Chicago.”

The second half of the program focused on how computational methods are used beyond campus, with applications in medicine, business, and public policy. A keynote speech from Alfio Gliozzo, research manager at IBM T.J. Watson Research Center, updated the story of the Watson platform, which famously beat two champions on the game show Jeopardy! in 2011. Gliozzo detailed IBM’s efforts to adapt Watson for business applications, including in highly specialized fields such as law and medicine. In order to meet their goal of computer-assisted human work, the company is expanding its “cognitive computing” methods to include new computational ways of representing reasoning and knowledge, Gliozzo said. 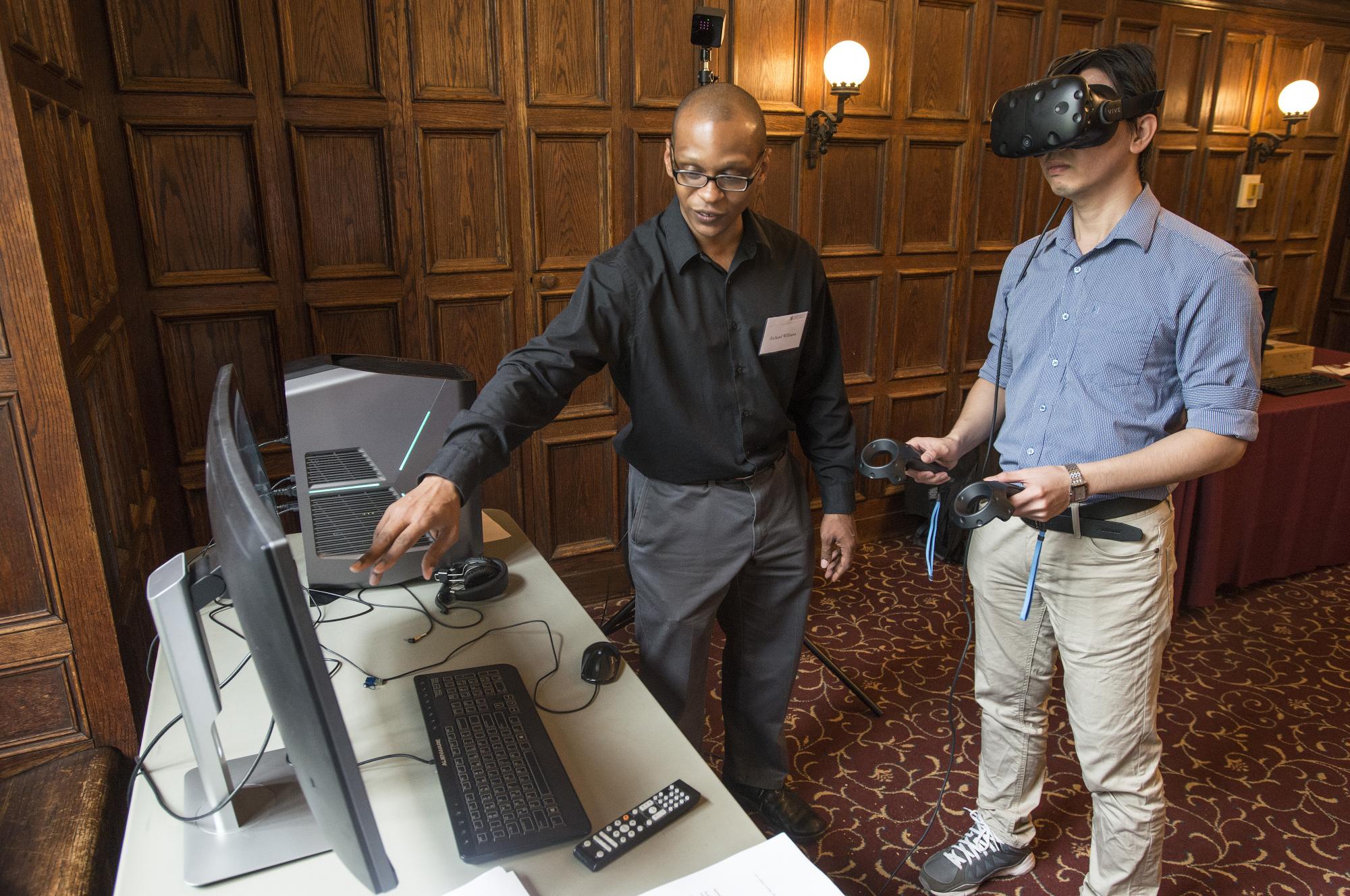 A closing panel discussion expanded this view of artificial intelligence and data-driven science in the marketplace, with input from two companies, Civis Analytics and Narrative Science, plus Michael Franklin, the Liew Family Chair of Computer Science at UChicago. In his previous position at the University of California-Berkeley, Franklin oversaw the the lab that developed Apache Spark, an open-source framework for big data analysis that quickly spread worldwide. The project demonstrates the potential of academic-industry partnerships, Franklin said.

“It’s a great story that shows that academic research can have real world impact; you don’t have to choose between basic science or impact, you can do both,” said Franklin, who is also Senior Advisor to Provost on Computation and Data Science. “If you’re at a university and you’re working on computer science and data science technology, think big, there’s no limit to the impact you can have.”

The panelists from private industry provided vivid illustrations of how methods developed by computer scientists and statisticians have seeped into the worlds of government and business. Scarlett Swerdlow of Civis echoed the earlier talk on human services contracts by talking about how her company uses data science to find families eligible for, but not receiving, anti-poverty assistance. Adam Kanouse’s Narrative Science uses “natural language generation” methods to transform data into plain language, helping businesses automate tedious processes such as writing reports and customer service.

Though the presentations spanned a variety of topics, the common thread through the full event was a spirit of collaboration -- as important in computational science as in more traditional forms of scholarship. Strong relationships between computer science, domain experts, and the resources and expertise at the RCC were critical again and again for producing new discoveries that push the frontiers of knowledge. 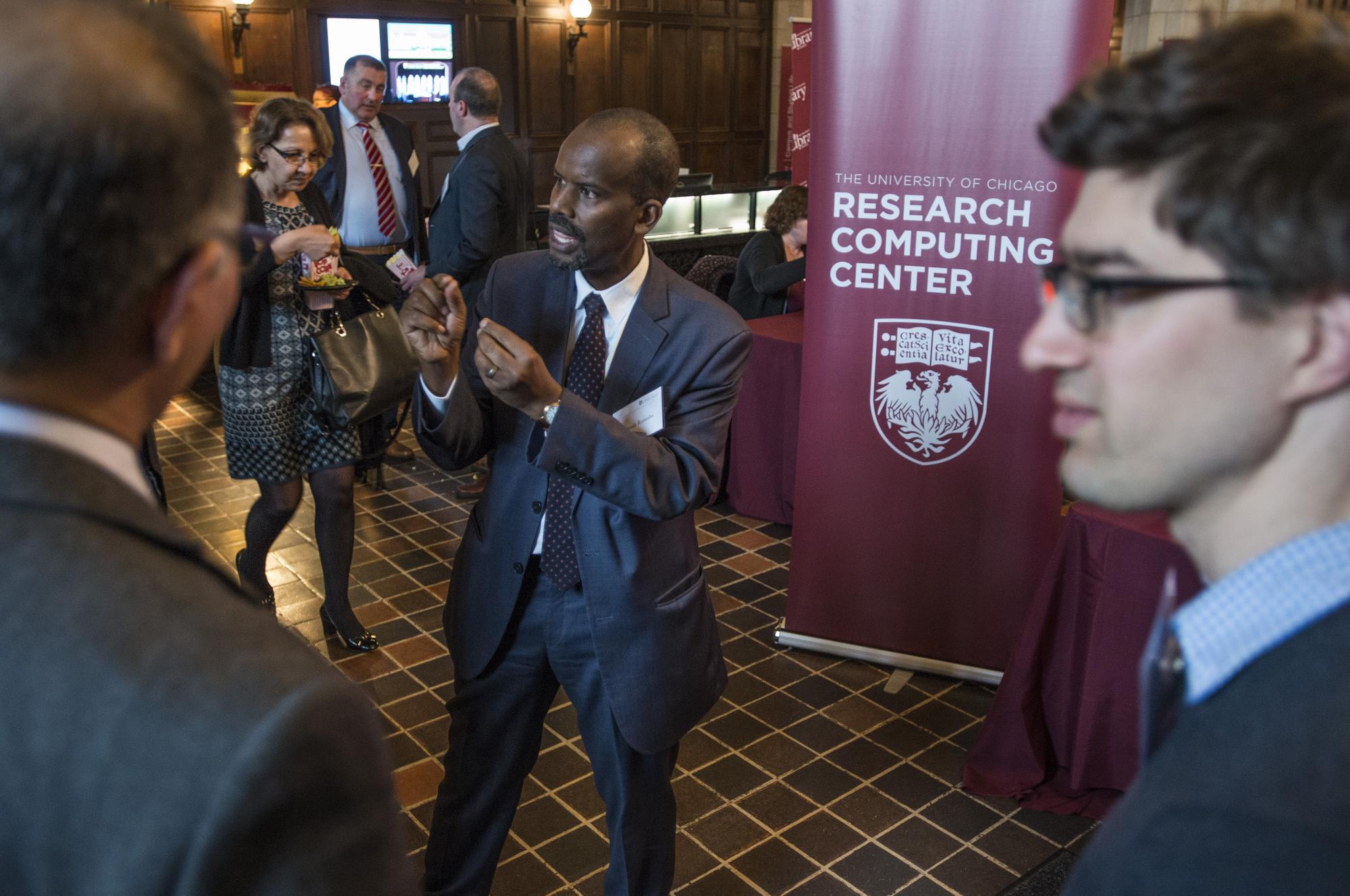 "Research is really becoming very interdisciplinary and collaborative in nature," Runesha said in his closing remarks. “RCC programs and services not only provide access to hardware and advanced technical support, but we really want to seek and work with you all to understand and support your research...so we can try together to enable and undertake research and analysis that would not otherwise be possible.”