Brain Awareness Day 2017 had barely started when a high school student asked Stephanie Cacioppo, director of High Performance Electrical NeuroImaging Laboratory (HPEN) and assistant professor of psychiatry and behavioral neuroscience, if the work of the HPEN, dealt with animal brains or human ones. Before she could answer, another student piped up: “Both!”

The students, from the UChicago Charter Woodlawn Campus (UCW), were in HPEN’s offices as part of Brain Awareness Day 2017, an annual collaboration between HPEN and the Research Computing Center (RCC) that brings local high school students to campus to learn more about the intersection between neuroscience and high-performance computing.

The students started their day in HPEN, where Stephanie Cacioppo was joined by John Cacioppo, the Tiffany and Margaret Blake Distinguished Service Professor of Psychology, and director of the Center for Cognitive and Social Neuroscience (CCSN). “The human brain is stunningly small,” he explained, but there are still approximately 430 trillion connections between neurons housed within each human brain. John and Stephanie Cacioppo led the students in making their own, miniature clay models of the brain, to illustrate aspects of its overall structure. Then, to demonstrate the way that the left and right hemispheres of the brain worked together, Stephanie Cacioppo drafted two students to lace a shoe together—each with one arm behind their back, and only one able to speak. 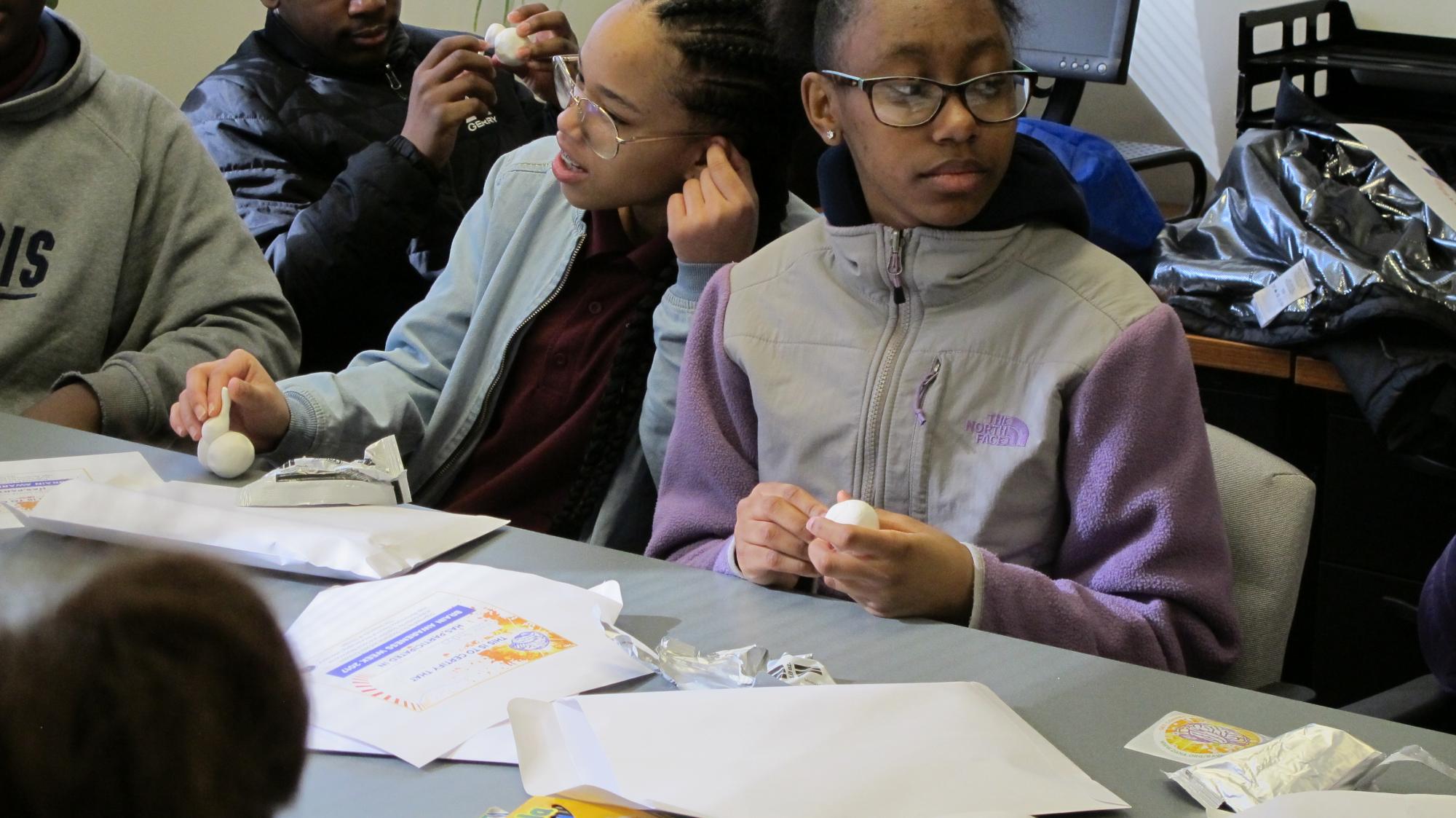 Students build model brains under the supervision of Stephanie and John Cacioppo.

First-year undergraduate student Sophia Kerstead then gave a presentation on disorders arising from brain damage, specifically damage to Broca’s Area, a location in the left hemisphere of the brain crucial to language. She showed them videos of patients with aphasia caused by brain injuries, whose words came out as gibberish even as they retained their other faculties. “It sounds silly,” she said, “but it’s frustrating” to be unable to communicate.

The students were then treated to a live EEG reading. (“Wow, that’s a real brain scan!” exclaimed one student.) Stephanie Cacioppo demonstrated how even subtle movements of the subject’s eyes were reflected in the EEG readouts, and after the students donned 3-D glasses she showed the students a three-dimensional reconstruction of the brain of an individual who had suffered a stroke in a specific cortical region.

For the second half of the day, the students moved to the Zar Room in the John Crerar Library, where RCC digital humanities computational scientist Jeffrey Tharsen introduced the students to multicore computing with an exercise. One student stood in the middle of the room with her hand extended, and all the other students had to run by and touch her hand as Tharsen timed them. This, he explained, is a single-core processor, doing one operation at a time. He then recruited three more students to join the original one, and timed their classmates as they filed past more quickly. This, he said, was a quad-core processor, doing four things at once. Multicore processing is one of the keys to modern high-performance computing, he explained, and made possible the research they were seeing today.

Dr. H. Birali Runesha, director of RCC and assistant vice-president for research computing, showed them the interior of a computing node, similar to the ones used on the Midway compute cluster. Midway is a powerful computer, Runesha explained, but one which takes tremendous resources to operate, consuming by itself enough electricity to power the rest of Hyde Park. The students then donned 3D glasses for a demonstration by Teodora Szasz, RCC’s image analysis and data visualization specialist. Szasz showed off the ability of the open-source program 3D Slicer to allow her to virtually dissect a brain from a living patient. She (virtually) peeled off the patient’s skin, muscles, and bone, leaving the brain rotating in space. A few students expressed squeamishness, but she reassured them: “It’s not a real brain, not real tissue—it’s just imaging.”

Then Szasz pulled out a treat: Google Cardboard. Google Cardboard is a simple 3D viewer (made of, yes, cardboard) that allows users to transform their cellphone into a virtual reality device with a free app. Szasz had them experiment with a game that took the students on a trip inside a human brain. Afterwards, the students ate a pizza lunch, asking questions of RCC’s staff as they did so. 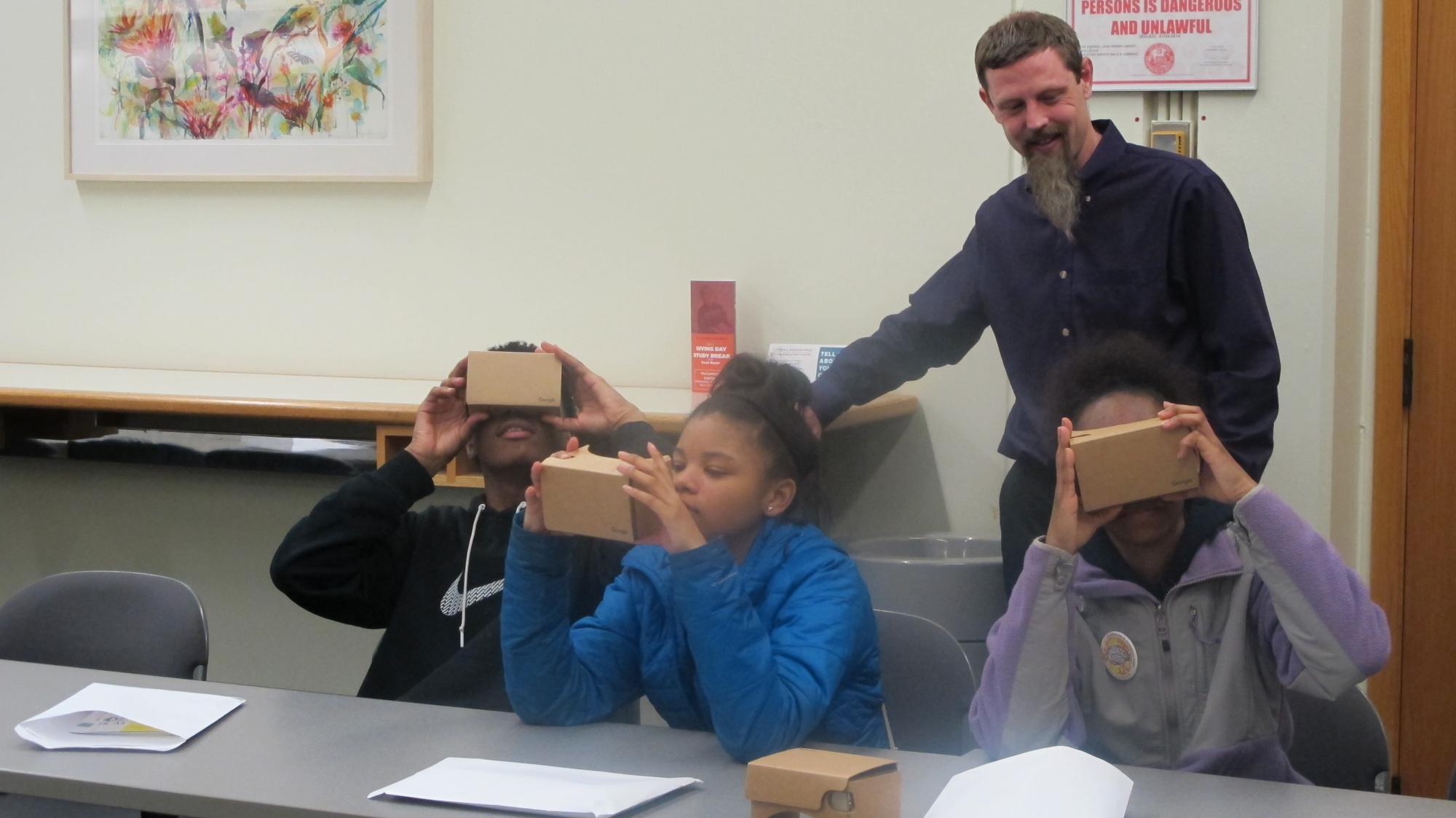 Brain Awareness Day 2017 marks the fifth year that RCC and HPEN have teamed up to offer the event, facilitated by the Office of Civic Engagement, and the second year that students from UCW have participated. Brian Awareness Day is part of Brain Awareness Week 2017, an annual global campaign to increase public awareness of the progress and benefits of brain research.